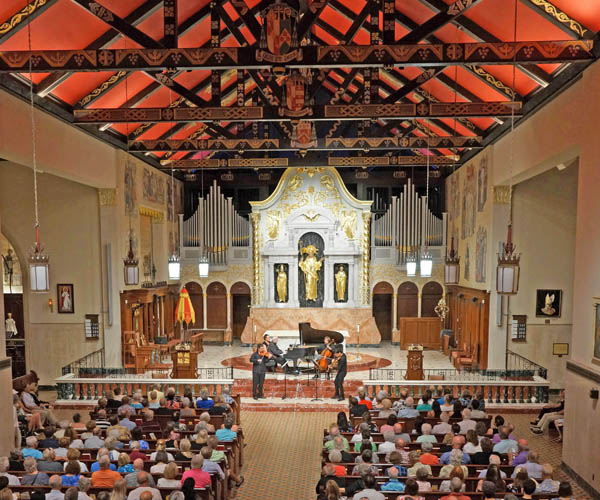 The immaculately beautiful St. Augustine Cathedral Basilica that welcomes worshippers, visitors, and St. Augustine Music Festival concert-goers today is the result of a major renovation and restoration that shuttered the structure for several months. The renovation, unveiled in March of 2015 in time for the city’s 450th birthday celebrations, included repair of water damage, rebuilding the altar platform and surrounding Sanctuary area, constructing a choir loft, enlarging the vestibule, and replacing all pews.

The Cathedral Basilica’s lineage reaches back to 1565, when Don Pedro Menendez de Aviles established St. Augustine in the name of Catholic Spain.

Menendez landed at the harbor of a native Timucuan settlement and founded what is now the oldest permanently occupied European settlement in the United States. The origins of the Cathedral Parish can be traced to this site, now the Mission Nombre de Dios, about two miles north of the current Cathedral Basilica.

The first record of a parish church was on the southeast corner of the city’s plaza, or town square. The structure, along with the rest of St. Augustine, was pillaged and burned in 1586 by British raiders led by Francis Drake. The rebuilt city was sacked again in 1702 by Carolina Governor James Moore, with the church again burned.

From 1763 to 1784, the British controlled Florida, and the Catholic parish languished. With the restoration of Spanish control in 1784, the construction of a church became a priority of the Spanish crown. In 1793, the cornerstone was laid for a parish church at the site of today’s Basilica.

The Diocese of St. Augustine was established in 1870, with the parish church raised to Cathedral for the new Diocese. A fire that spread from a nearby hotel in 1887 nearly destroyed the Cathedral, which was not only rebuilt but enlarged to its present-day scale. In 1976, Pope Paul VI raised the Cathedral to the status of minor basilica.

The St. Augustine Music Festival – an independent, not-for-profit group – has presented concerts in the Cathedral since 2007, thanks to the gracious permission and welcome of the parish.

For more about the Cathedral’s history, visit www.thefirstparish.org.